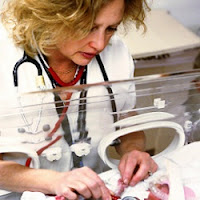 In this music called life, like the rising melody of an octave, a fertilized egg becomes an embryo, which then becomes the fetus, the fetus is finally born as an infant - which is called a neonate for the first charming 28 days of life. Infants are babies less than a year old - which then become toddlers, before they transform into little brats ;-)

Well, my point is, a physician specialized to care for the first 28 days of a babies life is called a neonatologist - not strictly 28 days really, we can give a bit of leeway here.

To preserve the good health of that breeze of freshness that we call a neonate, here are some mid-career, median, annual income of pediatric neonatologists:

As per the website Neonatology.org, "we can generalize and say that incomes range from $75,000/year for a recently-graduated neonatologist in a low-acuity or academic setting, to $250,000/year for a veteran neonatologist providing direct patient care and taking in-house night call in a high-acuity private setting. Of course, there are exceptions at both ends of the spectrum"

How to Become a Neonatologist in the USA ?

Following Medical school, a three year residency in Pediatrics followed by a 2 to 3 year fellowship training in Neonatology makes you a neonatologist.

So how is it to work as a neonatologist ? Check out this entertaining and informative slide show about how Dr. Robin Ohls spends her day as a Neonatologist at an academic medical center, beginning with an early morning jog !

3. Neonatology at a Glance

Email ThisBlogThis!Share to TwitterShare to FacebookShare to Pinterest
Tags Neonatology