So what kind of dough do licensed clinical psychologists earn ? Here are some annual, mid-career, median incomes at representative cities.

Clinical Psychologists with just a Master's Degree may earn an average of 45,000 to 50,000 or more depending on experience and managerial skills.

If Psychologists Treat the Mind and So Do the Psychiatrists - What's the Difference ?

1. Clinical Psychologists are not trained as Medical doctors, they are not MDs or DOs (psych-ology is the study of the mind, while psych-iatry is the treatment of the mind) . How long does it take to be a licensed Clinical Psychologist? Following a 2-year Masters degree, the doctoral programs in psychology take 5 to 6 intense research years to complete followed by 1 to 2 years of internships / Residency and/or supervised practice before being eligible for a state practice licensure.

2. Clinical Psychologists cannot prescribe medical drugs, while the psychiatrists can, and in fact prefer to - why ? I read an article that insurance companies pay the psychiatrists more for treatment rather than just psychotherapy - (a wrong incentive ?)

3. Clinical Psychologists earn much lower than what the psychiatrists do - compare the above figures with Psychiatrist Incomes in USA, unless of course you are Lorrie Rickman Stone.

Not heard about Lorrie ? She is a clinical psychologist who received a massive 70,000$ raise in her 2007 salary as the mental health program director for the Department of Human Services. Her salary went up rrom $116,460 to $186,000, when a special salary class was created just for her. She is also the wife of senator Emil' Jones and the enormous income raise came AFTER her hubby was sworn in as the Senate president. Note my stress my 'after' he he he...year clout works in American. As this article reports:
"She makes more than the governor or the agency director and is among the agency's two-dozen highest-paid employees - all physicians" 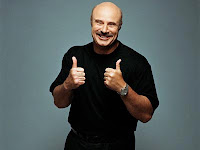 Yet Lorrie makes peanuts when you compare her with the highest paid Psychologist in America - Who's that ? Of Course, Dr. Phil McGraw - better known just as Dr. Phil on Television who makes more than 40 Million Dollars a year - well, he's a fine outlier who has merged media and psycholigical counseling to make a financially rewarding concoction. Recently though, he was in the bad news for trying to force himself on a psychologically disturbed Britney Spears and bring her on his show. Many accused him of trying to "jump on the Britney cash wagon".

You may come across some psychiatrists or other MDs, as I did, who openly or secretly do not approve of Clinical psychologists calling themselves 'Doctors' or using the 'Dr.' tags front of their names..... Well, that's one of those 'never-ending-debate' kinda topics - I strongly believe psychologists have an important place in the domain of mental healing.